I turned 40 on October 10th…. and it was truly an event. You should know that birthdays for both Kim and I really have been “non events;” that is, we never really had parties, or did much other than exchange a gift, and acknowledge that the day had passed. 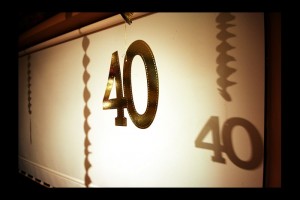 For many years, I had to calculcate my age, as I just never really remembered… it mattered very little to me. And so as I approached “The Big 40,” I assumed much would be the same. Again the number mattered little to me, and so there was not an overwhelming urge to celebrate this birthday…

As you know this has been a year that holds the context of “Health” for the Cole family, especially me. Health in a variety of areas, but to name some, financial, relationship, and time. It’s been a real journey (that’s another upcoming post) and on this journey, my perspective has changed on many things!

Take birthdays, for example. A few months ago, I actually found myself anticipating this birthday. What? What’s up with that? Birthdays were fairly meaningless events (other than the Nordstrom’s gift cards!) What could possibly have changed?

Oh…yeah… I get it.. Margins. Relationship happens in the margins… As I create more margin in life, my relationships grow stronger. Margins are like the sun is to plant life, it is a requirement for them to grow. And guess what? My relationships have been growing deeper and more genuine every day. And this, my friends, has caused me to begin to embrace, of all things, birthdays.

But we still did not have plans, or so I thought. Then some dear friends invited us over for dinner, for my B-day. I walked in, we chit-chatted, and then it happened… “SURPRISE!”

So remember, I’ve not really celebrated birtdays much of late, and had not sewn deeply into relationships, and so a surprise party was not on my radar (and I have a pretty good radar, and can usually catch the leaks of these things fairly well, so I’m a bit tough to surprise.)

But here’s the real truth.. a few months ago, I REALLY began to want a surprise party! It made me giddy just thinking about it. I did not do anything with the thought, but deep way down inside, something wanted it.

So here we are, and after the “Big Reveal” I began to scan the crowd. And the crowd was made up of people who have made a significant impact in my life over the last year; people that are walking with me, encouraging me, loving me. Can you imagine opening your eyes to see the majority of relationships that you hold dear, standing right in front of you? The weight of that moment did not fully sink in until quite a bit later.

Margins… you should really try having some.. I want SO much more. There is life in the margins (there is God in the margins), and so many times we look for life in other, much less effective places. Give it a go, you too could have an